Last week, the Carbon Engineering team demonstrated “AIR&nbspTO&nbspFUELS” by directly synthesizing a mixture of gasoline and diesel using only CO2 captured from the air and hydrogen split from water with clean electricity.

Over the last few years, we have been working on a concept we call “AIR&nbspTO&nbspFUELS”, or A2F for short. A2F uses our direct air capture technology to extract and purify CO2 from the air, and employs electrolysis to produce hydrogen from water using renewable electricity. The CO2 and hydrogen are then combined in a process called “thermo-catalysis”, where they are directly synthesized into liquid fuels such as gasoline and diesel (and in the future, jet fuel also). A2F is a potentially game-changing technology, which if successfully scaled up, will allow us to harness cheap intermittent renewable electricity to drive synthesis of liquid fuels that are compatible with modern infrastructure and engines. This offers an alternative to biofuels and a complement to electric vehicles in the effort to displace fossil fuels from transportation.

This recent achievement builds on a lot of previous work and effort here at CE. We have been developing direct air capture technology since our inception in 2009, and in October 2015, we commissioned a DAC pilot plant here in Squamish B.C. which captures and purifies 1 tonne of CO2 per day from the atmosphere (see our previous blog post, and video coverage). For the past year, our engineering and operations teams have been building on this by installing water electrolysis and fuel synthesis modules (another post on the arrival of this equipment, from Greyrock Energy), which once combined with our DAC pilot, give us the capability to synthesize roughly 1 barrel of fuel per day. This month we successfully integrated and started up our equipment, and have now produced the first small quantities of liquid fuels. 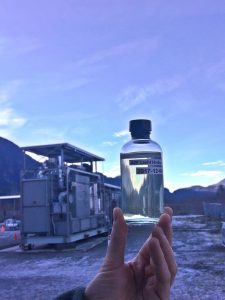 Fuels! A mix of gasoline and diesel, that the CE team synthesized from carbon captured out of the air and hydrogen split from water, all powered with clean electricity.

This milestone is important, but in fact, it’s not the first time that fuels have been made from CO2 and H2. That has been done in small-scale demos before, but we do think our pilot plant is the first instance of “AIR&nbspTO&nbspFUELS” where all the equipment has large-scale industrial precedent, and thus gives real indication of commercial performance and viability, and leads directly to scale-up and deployment.

Our recent achievement of “first fuels” here in Squamish is an important stepping stone towards engineering and deploying large commercial-scale A2F facilities in coming years. Our internal data and work show that A2F will be able supply fuels into leading markets that place premium value on their low life-cycle carbon intensity with viable economics.

Further, while A2F fuels are at best carbon neutral, our progress also has relevance to the concept of “carbon dioxide removal”. CDR – or sometimes referred to as “negative emissions” – is the concept of removing and permanently storing industrial-scale quantities of CO2 from the air to help avoid climate risk. Recent articles in Wired (here) and the Economist (here and here) have highlighted the growing recognition that negative emissions are baked into many climate mitigation scenarios, but that precious few projects are actually being deployed and tested. While A2F fuels do not themselves qualify as CDR, we have an opportunity to deploy A2F – based around our core direct air capture technology – as a means to scale up and commercialize, and in so doing, prepare to deploy direct air capture in a CDR role once markets are ready.

Overall, our hope is that A2F can add to the on-going emissions mitigation efforts in the transportation sector, and that DAC can also play a CDR role to augment aggressive mitigation efforts across all sectors, to accelerate us towards net zero GHG emissions as soon as possible.

There is lots of work still to do to get A2F into market, but for the moment, we simply wish to highlight the hard work and smarts that it took our team to get to this milestone. -GH.