The pledge, which is in alignment with the United Nations’ Women’s Empowerment Principles and the achievement of Global Goal #5 (achieving gender equality and empowering all women and girls), signals an agreement to commit to seven principles in the pursuit of increasing female leadership and fostering inclusive cultures.

“Signing the pledge made perfect sense for our organization,” said Steve Oldham, CEO of CE. “I believe our company is made stronger through our diversity and I am committed to advancing that cause through all levels of the organization.

“CE was built with a mission to develop innovative, groundbreaking technologies, and a core part of what drives our innovation is our diversity, and the differences of opinion that diversity brings. We are currently in a period of rapid growth and we sign this pledge to help guide our company as we grow, and to signal that inclusiveness is a key tenet of our culture.” 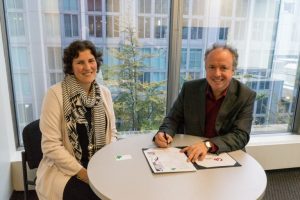 CE has strong female representation across the company, including female scientists, engineers, laboratory technicians and plant operators, many of whom are in leadership roles, and half of the company’s senior level positions are held by women.

“We are proud to have a high number of women represented in roles across the company” said Susan Koch, CE’s CFO. “But this pledge recognizes that a company must be proactive to support diversity. Gender parity, especially in the tech industry, requires continued commitment, support, and open discussion if we hope to foster cultures that set women up to succeed. At CE, this pledge highlights our commitment to implement strategies and policies that prioritize and champion diversity in our organization, and to continue to nurture a culture that welcomes diversity.”

CE joins more than 25 other B.C. organizations whose CEO’s have become signatories of the pledge, including BC Hydro, BCLC, Best Buy, and the City of Vancouver.

Steve Oldham, CEO of Carbon Engineering, sits at a table with Tina Strehlke, CEO of Minerva

“We are delighted that Steve has signed Minerva’s Diversity Pledge on behalf of Carbon Engineering,” said Tina Strehlke, CEO of Minerva. “As a company working on the leading edge of science and technology – having a diverse team is a business imperative. Steve has shown that you don’t have to sacrifice talent or experience when building a gender balanced leadership team.”

Mr. Oldham’s signing of the pledge comes days after the Minerva Foundation released the 2018 Face of Leadership™ BC Scorecard and BC Tech Scorecard. These annual reports give a snapshot of the representation of women and Indigenous women on corporate boards and in senior executive leadership in BC’s top revenue-generating companies.

The BC Tech Scorecard, which analyzed BC’s top 25 revenue-generating tech companies, found that on average, women held 23 per cent of executive leadership positions and 26 per cent of board of directors seats.

About Carbon Engineering (CE):
Founded in 2009, CE is a Canadian-based clean energy company commercializing two clean energy technologies that can rapidly accelerate our shift to a net-zero world: Direct Air Capture technology can deliver large-scale negative emissions by removing carbon dioxide directly from the atmosphere; and AIR&nbspTO&nbspFUELSTM technology can significantly reduce the carbon footprint of transportation by creating clean synthetic fuels – made from air, water and renewable power. From a pilot plant in Squamish, B.C., CE has been removing CO2 from the atmosphere since 2015 and converting it into fuels since 2017.

About Minerva BC:
Minerva BC is a registered charity founded in 1999. Dedicated to developing and promoting women’s leadership, Minerva delivers a suite of programs and education awards to empower women to reach their full potential. The Face of Leadership initiative is a measurement and engagement strategy for BC’s business sector.