SQUAMISH, British Columbia (October 14, 2021) – Today, Canadian clean energy company, Huron Clean Energy (Huron) with its partners, The Upper Nicola Band, Oxy Low Carbon Ventures and Carbon Engineering (CE), announced that preliminary engineering and design has begun on a large-scale, commercial facility in British Columbia (B.C.) that would produce transportation fuel out of atmospheric carbon dioxide. The proposed facility is being designed to utilize CE’s Direct Air Capture and AIR&nbspTO&nbspFUELSTM technologies to capture carbon dioxide out of the air and deliver up to 100 million litres of ultra-low carbon fuel each year.

Powered by B.C.’s clean hydroelectricity, the plant will combine atmospheric carbon dioxide with hydrogen to produce renewable fuel, such as gasoline, diesel, and jet fuel. These fuels create up to 90 per cent fewer emissions than conventional hydrocarbons and work in existing airplanes, ships, trucks and cars without the need to modify the vehicles.

The AIR&nbspTO&nbspFUELSTM solution provides a pathway to significantly reduce transportation emissions. These fuels can be an important complement to electric vehicles by providing a clean liquid fuel for transport sectors that are difficult to electrify and today require the high energy density of liquid fuels, such as aviation and shipping.

The facility is slated to be built 25kms from Merritt, B.C., on one of Upper Nicola Band’s eight reserves. The plant is expected to occupy approximately 100 acres of commercially designated band land, and Huron has partnered with Upper Nicola Holdings Limited Partnership (UNHLP) on a land and business participation agreement. Huron intends to partner with Oxy Low Carbon Ventures, a subsidiary of Occidental, as Huron’s execution and operations partner on the project. Construction is expected to begin in 2023 with operations targeted to commence approximately three years after that.

The partners have commenced a preliminary feasibility engineering and design study on the AIR&nbspTO&nbspFUELSTM facility. The B.C. Government’s Innovative Clean Energy Fund is contributing $2 million in funding to the initial design work, demonstrating the Province’s continuing support for home-grown cleantech innovations.

CE’s proprietary technology was conceived and designed in Canada. As part of the project evaluation, the federal government, through the Strategic Innovation Fund, is evaluating the project and tracking the engineering work closely. As an initial investor in the demonstration plant in Squamish, the federal government is keen to determine the best path to deploy the technology in Canada. The proposed project is expected to create thousands of local jobs during construction and hundreds of high-quality jobs for the ongoing operation of the facility.

With a target production capability of up to 100 million litres of fuel each year, the project is expected to make a significant contribution to the B.C. Government’s CleanBC target of 650 million litres of renewable and low-carbon fuel production by 2030. The project is also expected to create demand for up to 25,000 tonnes of green hydrogen annually, representing Canada’s largest green hydrogen project announced to date – a clear demonstration of B.C.’s Hydrogen Strategy in action.

The Honourable Bruce Ralston, Minister of Energy, Mines and Low-Carbon Innovation said: “The Merritt Electro Fuels Project advances made-in-B.C. technology to capture carbon dioxide directly from the atmosphere and convert it into clean fuels. This innovative, world-leading project will support our economy’s shift away from fossil fuels while creating new jobs and opportunities for British Columbians.”

The Honourable George Heyman, Minister of Environment and Climate Change Strategy said: “By working together in partnership with the Upper Nicola First Nation, we are funding new, innovative technology to advance reconciliation and build a low-carbon future for B.C. Through CleanBC, this project upon completion will significantly reduce emissions while creating long-term, clean jobs for people in the Nicola Valley.”

Chief Harvey McLeod of the Upper Nicola Band said: “Upper Nicola is excited to partner on this innovative development and we are honoured to play a role in implementing new technology to lower emissions and tackle climate change. Through UNHLP, we have been quietly advancing other clean energy development on our Reserve lands and this project aligns perfectly with our Community and Economic priorities.”

Michael Hutchison, President of Huron said: “Our vision at Huron is to inspire a global shift towards preserving the planet, and we hope to realize this through the deployment of CE’s game-changing technology across Canada. This will be pure Canadian innovation. In cooperation with First Nations partners, CE and Oxy Low Carbon Ventures, we will leverage the expertise of both Occidental and Huron to deliver facilities that will bring significant emissions reductions and environmental benefits. They will also lead to the development of new Canadian industries and thousands of Canadian jobs.”

Richard Jackson, President, U.S. Onshore Resources and Carbon Management, of Occidental, said: “Occidental has more than 40 years of carbon management experience and leadership, and Oxy Low Carbon Ventures is applying our technical ingenuity and engineering skill to help make large-scale DAC facilities a reality. We look forward to working with Huron and Carbon Engineering to commercialize the combination of DAC and AIR&nbspTO&nbspFUELSTM technology.”

Steve Oldham, CEO of CE said: “Carbon Engineering’s climate solutions were developed here at home in Canada, with B.C. providing the ideal location for our company to innovate and grow. I couldn’t think of a more fitting location for the proposed development of our first commercial AIR&nbspTO&nbspFUELSTM plant. Our Canadian-made solutions have the potential to be key tools in the efforts to achieve the Province’s CleanBC and Canada’s net zero goals, and we’re grateful for the B.C. Government’s continued support and commitment to the low-carbon transition.”

Huron has appointed Macquarie Capital Markets Canada Ltd., a member of the Macquarie Group of companies, and Ernst & Young Orenda Corporate Finance Inc., the corporate finance arm of EY LLP, as co-financial advisors in connection with the commercialization and financing of the project.

About the Government of B.C. Innovative Clean Energy Fund:
The Innovative Clean Energy (ICE) Fund was established in 2007 and was designed to support government’s energy and environmental priorities and advance British Columbia’s clean energy sector. It receives funding through a 0.4% levy on the final sale of specified energy products – currently natural gas, fuel oil and propane distribution systems.

About Huron:
Founded in 2018, Huron Clean Energy is a Canadian-based energy company that has partnered with Carbon Engineering Ltd. to own and operate commercial-scale DAC and AIR&nbspTO&nbspFUELSTM plants. Carbon Engineering has licensed their DAC and AIR&nbspTO&nbspFUELSTM technology to Huron Clean Energy to build, own, and operate commercial plants that will enable the production of renewable synthetic liquid fuels made from just three major inputs – air, water, and renewable energy. Visit www.huroncleanenergy.com

About CE:
Founded in 2009, Carbon Engineering (CE) is a Canadian-based clean energy company. CE is focused on the global deployment of megaton-scale Direct Air Capture (DAC) technology that captures carbon dioxide (CO2) out of the atmosphere so it can be permanently stored deep underground or used to produce clean, affordable transportation fuels. From a pilot plant in British Columbia, CE has been capturing CO2 from the atmosphere since 2015 and converting it into fuels since 2017. More information can be found at carbonengineering.com.

About Macquarie Group:
Macquarie Group Limited (“Macquarie”) is a diversified financial group providing clients with asset management and finance, banking, advisory, risk and capital solutions across debt, equity and commodities. As of March 31, 2021, Macquarie had assets under management of US$428.3 billion. Macquarie Capital Markets Canada Ltd. is part of a division of Macquarie Group, which provides corporate advisory, capital markets and principal investing capabilities with specialist, global expertise in infrastructure, renewables, energy, technology, and commodities. For further information, visit www.macquarie.com.

Images below from the announcement at Carbon Engineering’s pilot facility in Squamish, B.C. on October 14, 2021 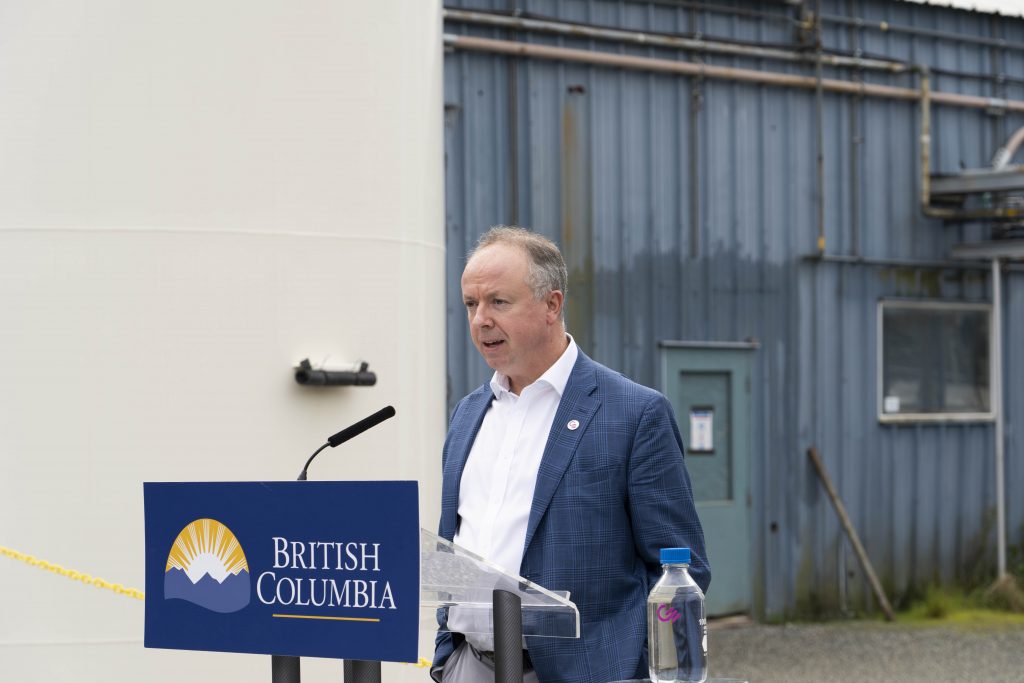 Carbon Engineering CEO Steve Oldham at a media event held at the company’s pilot facility in Squamish, B.C., announcing a large-scale commercial facility in Canada to produce fuel from air. 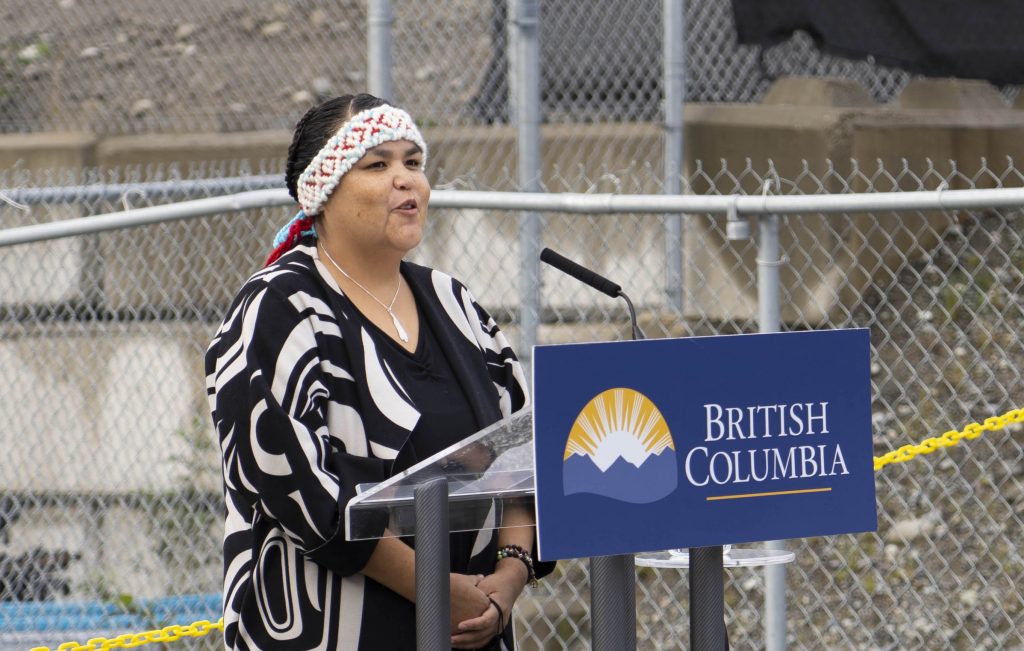 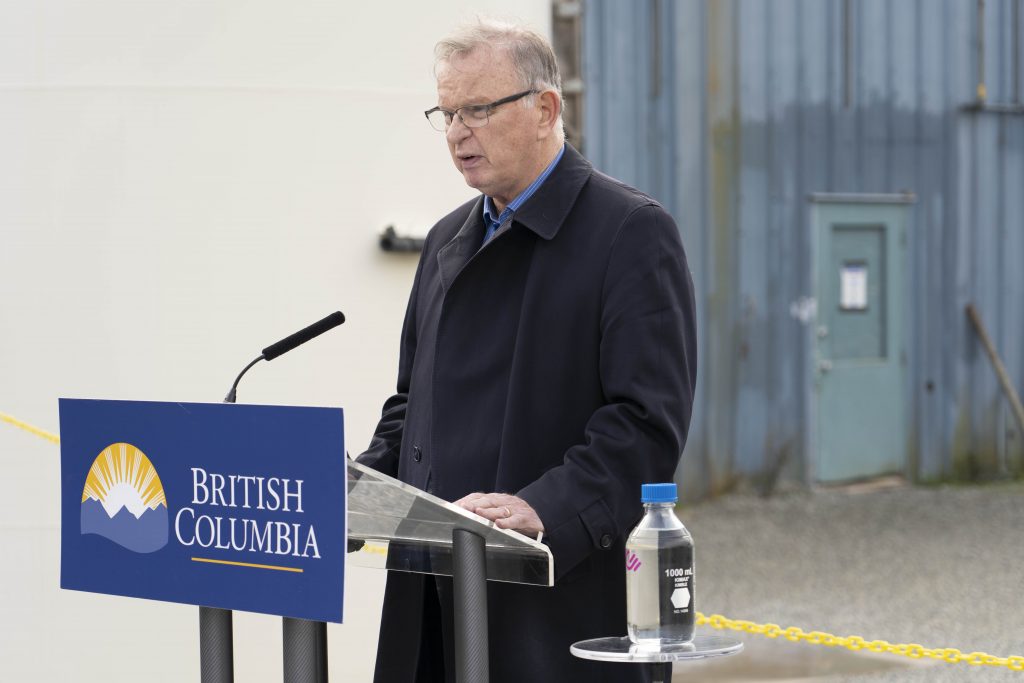 Hon. Bruce Ralston, Minister of Energy, Mines and Petroleum Resources, at a media event announcing a large-scale commercial facility in Canada to produce fuel from air. 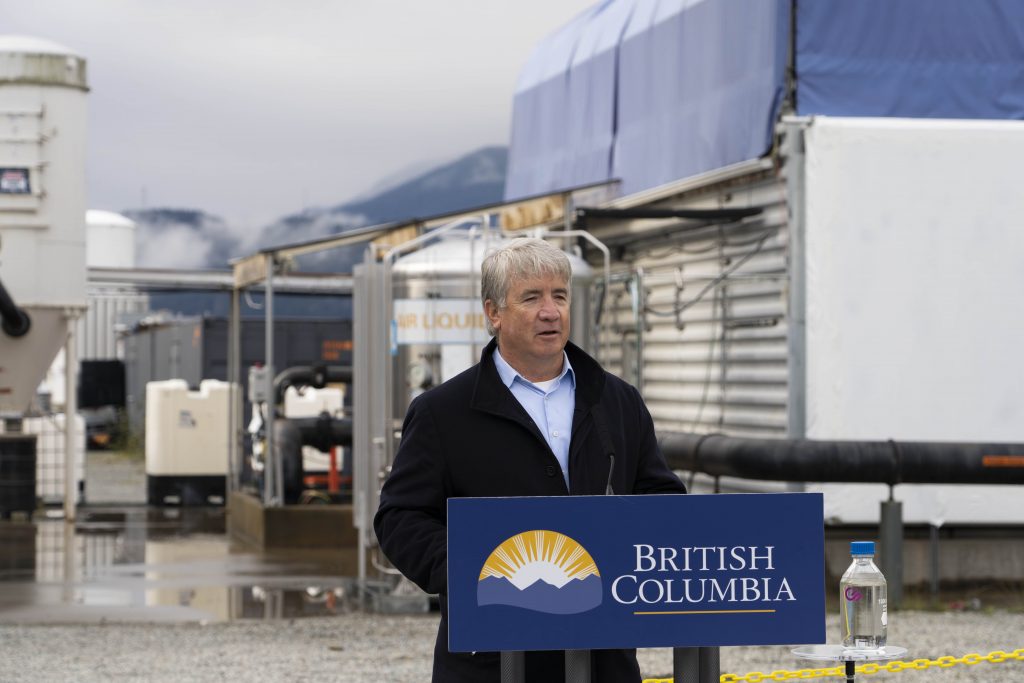 CEO of Huron Clean Energy, Michael Hutchison, at a media event announcing a large-scale commercial facility in Canada to produce fuel from air. 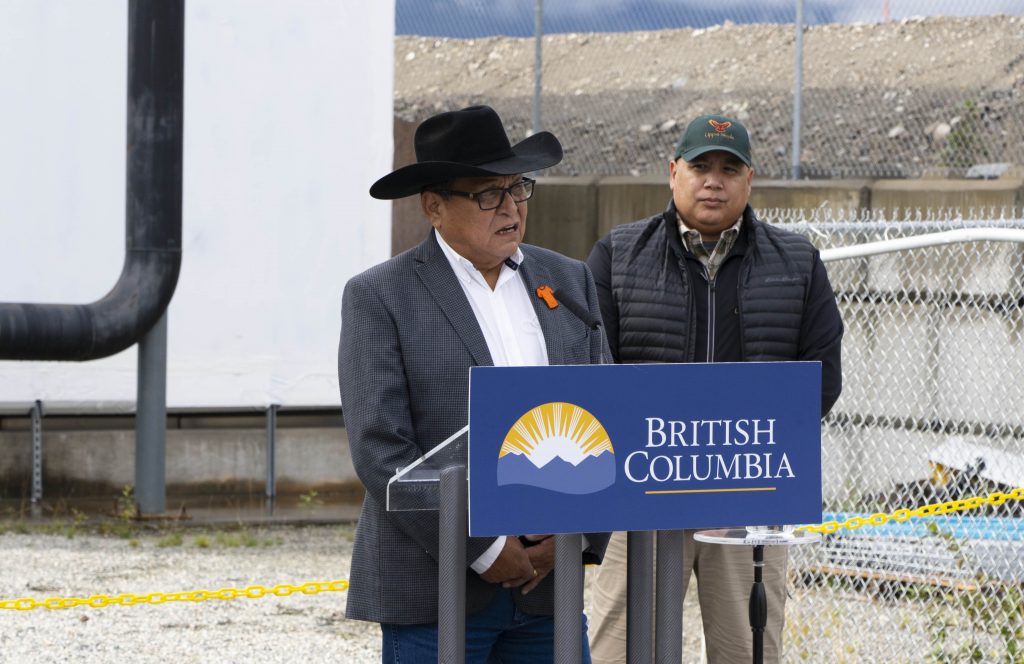 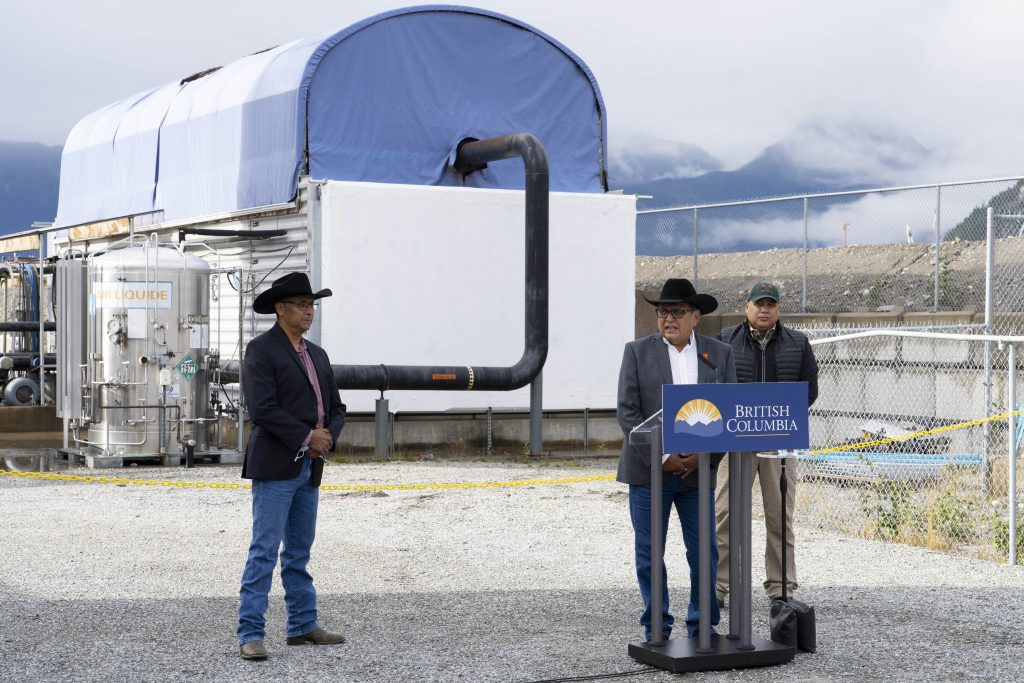 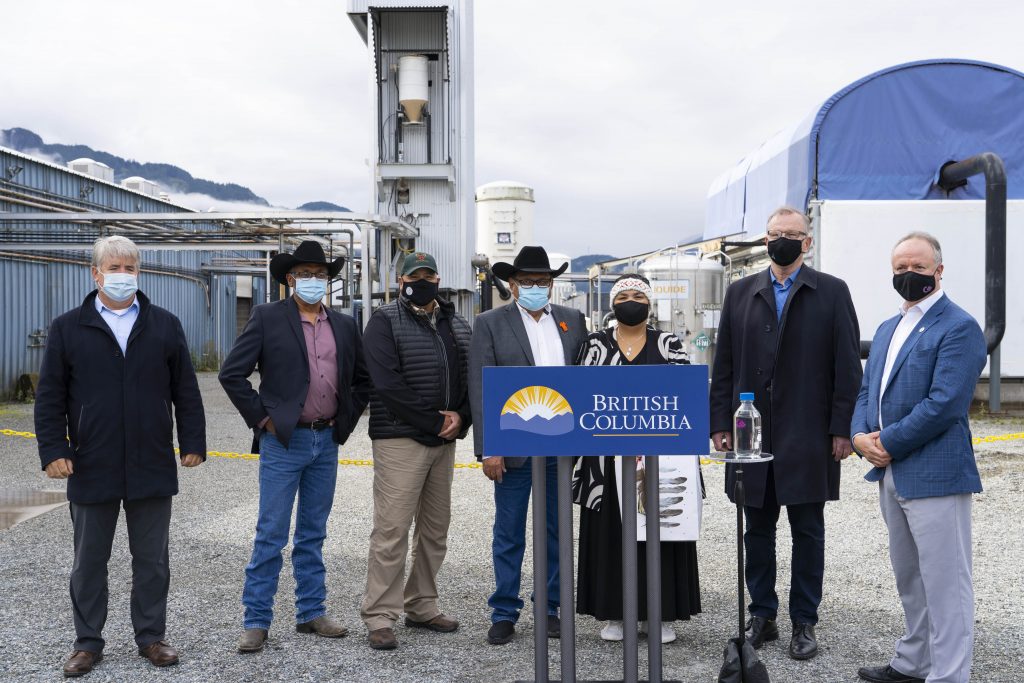 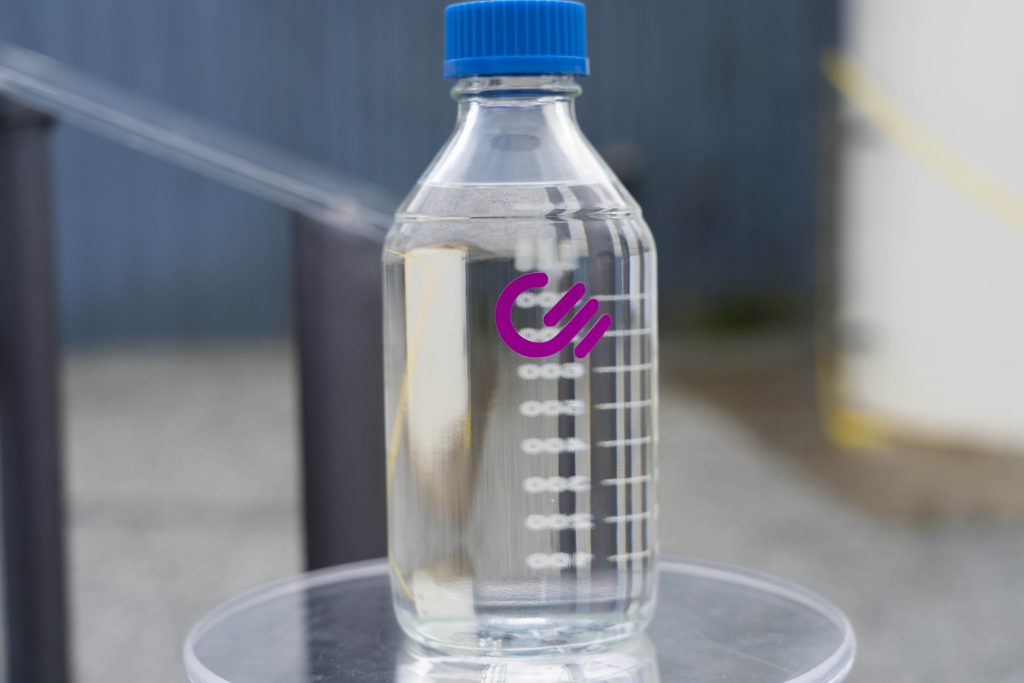